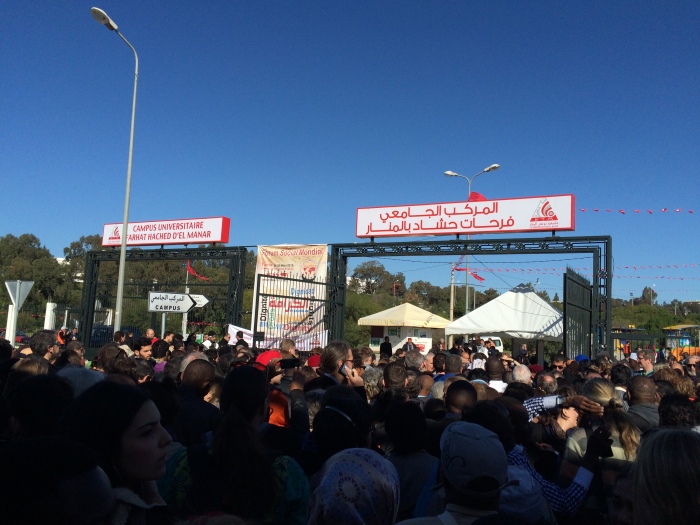 Thousands of people from around the world attended the World Social Forum in Tunis at the end of March. Security was up due to the horrific attack at the Bardo Museum only the week before, but spirits and energies were also high. Participants with their WSF badges, both Tunisian and international, were identifiable throughout the city, along with young Tunisian volunteers wearing blue vests. When we braved the crowded metro to get to the opening march, we squeezed in next to politicians and community organizers from across the globe.

Throughout the hundreds of activities, translation was a constant challenge. Impressively, the World Social Forum organizers tried to have at least a few volunteer translators at each event. But technical issues abounded, speakers spoke too quickly for the translators, translations were understandably imperfect, and often it was a random participant at the last minute who offered to translate, periodically whispering back to a group of people who happened to speak French or English or Spanish or Arabic. One of the most striking aspects of the Forum was this constant flurry of languages among people united by common interests. 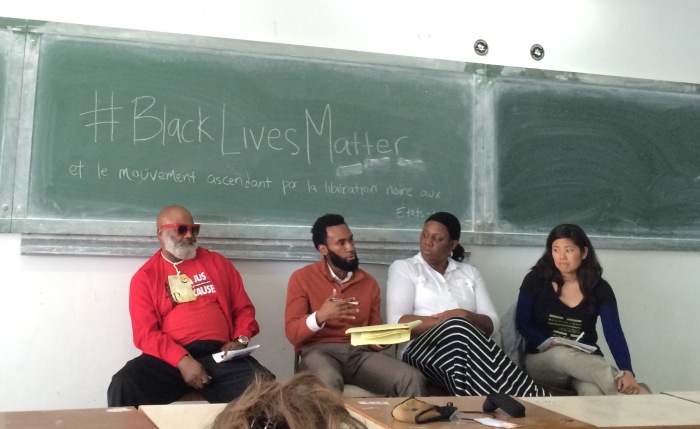 On the first day I went to a #BlackLivesMatter event organized by the Grassroots Global Justice Alliance. Activists from Jackson, Miami, and Oakland shared experiences of racial injustice, especially in light of the recent police killings of black men, and efforts to join forces for justice across the United States. One Asian American woman talked about the movement #Asians4BlackLives and how Asians in the U.S. have been used in a “divide-and-conquer” strategy within a white supremacist system, rendering alliances across identity groups all the more important.

What made this event even more interesting was the fact that most of the participants were Brazilians from black justice movements in Brazil. My Brazilian colleague ended up translating from Portuguese to English and back again as they asked questions of the American activists, eager to make connections between what they had just heard and their own experiences. They expanded the debate as well: “How do your movements treat capitalism? What about economic justice?”, asked one Brazilian. “If you get rid of white supremacy without addressing capitalism, you perpetuate an oppressive system,” responded an American activist, who forms part of the Malcolm X Grassroots Movement (His own reflection on the World Social Forum can be found here.)

I myself was at the World Social Forum for having taken part in some research on civil society involvement in Habitat III, set to take place in Quito, Ecuador in 2016. This is the massive conference that takes place every twenty years to produce a “Habitat Agenda” designed to guide the actions of UN member states in dealing with rapid urbanization across the globe. So I attended events organized by Habitat International Coalition and other groups fighting for the rights to housing internationally, where there was discussion about how Habitat III can be used as an opportunity to further mobilize towards these rights. It was fascinating to hear stories from Morocco to Belgium to Taiwan to Cameroon, about building movements for land and housing rights, fighting evictions, and understanding rural-urban linkages. It is clear that concepts like the “Right to the City”—re-worked and re-defined in many ways since Henri Lefebvre originally wrote a book on the subject—and the “social function of land and property”, are gaining ground and that movements in various places are finding meaning in these principles.

Still, there was some frustration as to how to collectively use the forum space: should it be used to acquaint newcomers with these ideas? To hear about others’ experiences in their own countries? To debate and agree on certain principles? To make connections and form new alliances with other groups? To build a global movement? Or, is it to do all of these things? (And if so, how is it possible to do this with such limited time provided in the context of the World Social Forum?) 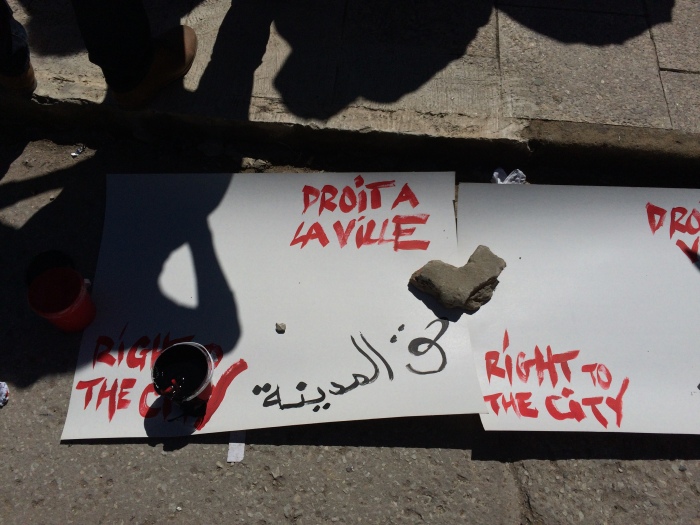 Habitat III certainly seemed to inspire some frustration. The space for civil society to engage in Habitat III actually seems to have narrowed since the first Habitat conference took place in Vancouver in 1976. At the Forum in Tunis, some groups seemed eager to find a way to engage in Habitat III, not to be left out of the process, while others seemed suspicious—hardly surprising for such a vast UN apparatus like this one that so far, has mildly encouraged civil society participation but has not taken active steps to ensure civil society groups are included. One person asserted it was necessary to play “hardball”: if the Habitat III doors are not open to civil society, then civil society should not go to Quito at all. Another person suggested that if that were the case, there would still be NGOs and other organizations who would participate, and that these groups would be used by the UN to legitimate its procedures. Others said that in the case that civil society were not welcome in Habitat III, then at the very least alternative activities should be organized in Quito, and steps should be taken to anticipate the repercussions that such a mega-event could have for residents of Quito itself. The only thing that seemed clear was that there was no consensus on how it might be possible to for civil society to have a unified approach as to engaging (or not engaging) with Habitat III.

In addition, there is the question of who actually constitutes “civil society”. Throughout the week I heard a few comments about how the World Social Forum in general is becoming increasingly “professionalized”, with many professionals, academics, NGO employees, etc., forming part of recent transnational networks and organizations. This is not necessarily a bad thing—in the fight for alternatives to neoliberal globalization, the more the merrier, right?—but it does mean a lot of the debate risks becoming inaccessible to to all but the university-educated. It means the conversation might be diverted away from the grassroots activists and social movements who formed the basis for the first World Social Forum in Porto Alegre. Within debates about Habitat III, one woman stated that the discussions on the “Right to the City” were getting technocratic. That comment has stayed with me. As I find myself somewhere between the worlds of activism and academia (not that these are two disparate, opposing worlds), the question of how to discuss and expand these ideas while keeping them relevant to real movements and struggles is a crucial one.

While it was so difficult to decide what final WSF activity to attend, on the last day I went to a “Feminists Unite” event again organized by Global Grassroots Justice and the World March of Women. The energy in the crowded room was immediately apparent, the kind of energy you would hope for at a World Social Forum. A panel of women from Palestine, Tunisia, Kurdistan, Mozambique, and the U.S. shared experiences of women’s struggles in their respective countries. The woman from Erbil explained Kurdish women’s concept of “self-defense”, and how, while Kurdish women fighters are breaking the stereotype that women in war are merely victims, they are also not glorifying their use of weapons. Rather, they are forced to use weapons to defend themselves within a global militaristic patriarchal system. The woman from Mozambique talked about how large development investments from countries like Brazil and China are affecting women’s rights to land in Mozambique—effectively connecting gender and land rights struggles in a powerful way. Since everyone kept to their allotted speaking time, there was then time to divide up into groups to discuss particular issues, from war and militarization to climate change. I think the best part of this was in reporting these discussions back to the larger group: one young Tunisian woman, who had volunteered as a translator at the event, ended up being the one to summarize the key points from her group (in English, presumably her third language), passionately explaining the struggles of women in work, using international examples as well as from her own Tunisia. 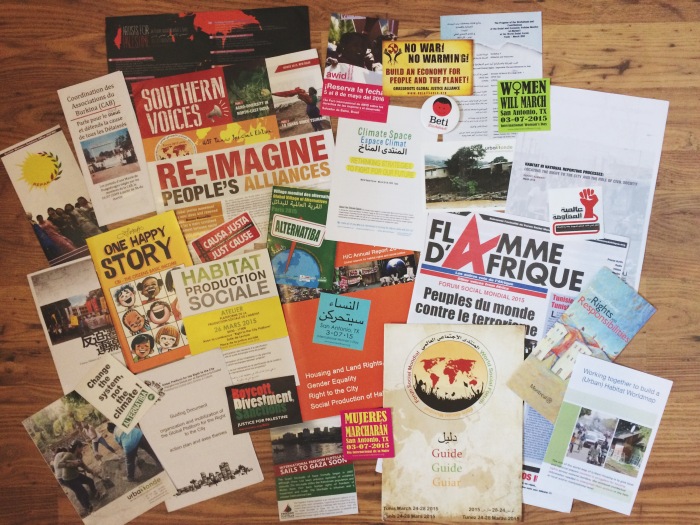 In the end i think it is the imperfect and sometimes haphazard translation that took place in each event that is the perfect metaphor for the World Social Forum itself. Translating concepts across cultures and finding commonalities between struggles while maintaining an awareness of very different political and historical contexts is not an easy process. It is always imperfect. The sheer diversity of experiences and histories and languages in such a space is in moments overwhelming. But it is the possibility of translation, of identifying common struggles, of asking and learning how to be an ally to others, that is the lasting value of events like the World Social Forum.