Hebron, the largest Palestinian urban center in the West Bank, is increasingly known as a contested and embattled space. It is unique in the occupied Palestinian territories because Israeli settlements have been established inside the city. Mundane violence and segregation are evident here, most starkly culminating in Shuhada Street, once a bustling Palestinian thoroughfare, now off-limits to Palestinians. Numerous international organizations have set up shop here to document daily human rights abuses, though they’ve had little success in holding settlers and Israel accountable to their policies. There are many tours one can take while visiting Hebron, which is almost always recommended to visiting internationals itching to get a feel for “the situation,” at odds with all liberal sentiments. These kinds of tours often use Hebron as an example of a particularly dire situation, where Israeli settlers have taken things to the extreme. And extreme examples abound, such as when the Israeli military recently detained a 5-year old Palestinian. But is Hebron an exception to the rule?

Like so many other Israeli settlements throughout the West Bank, settlements in Hebron’s city center were established with assistance from the Israeli army, in the 1970s. Currently there are about 500 settlers in Hebron, with about 2,500 to 4,000 Israeli soldiers stationed around the area to protect them. In 1994, New York-born Israeli settler Baruch Goldstein massacred 29 praying Palestinians at the Tomb of the Patriarchs. This is when Israel began limiting the movement of Palestinians in Hebron, supposedly to increase security (ha, ha). With the Oslo Accords, Hebron was divided into zones indicating various degrees of Israeli and Palestinian control, mirroring the division of the entire West Bank into Areas A, B, and C. Shuhada Street was completely closed off to Palestinians (except for residents of the street, but even they are limited in their access) with the outbreak of the Second Intifada in 2000.

According to B’Tselem, 304 Palestinian-owned shops and warehouses along the street were shut down, and Israel even turned the central bus station into an army base. This has completely stifled the Palestinian economy in this area, which is now known by many as a ghost town.

I have visited Hebron on three occasions. These photos are mainly from my second visit, in December of 2012, when I visited with two Americans, a Canadian, and a Palestinian. We arrived in the afternoon as the sun was setting. 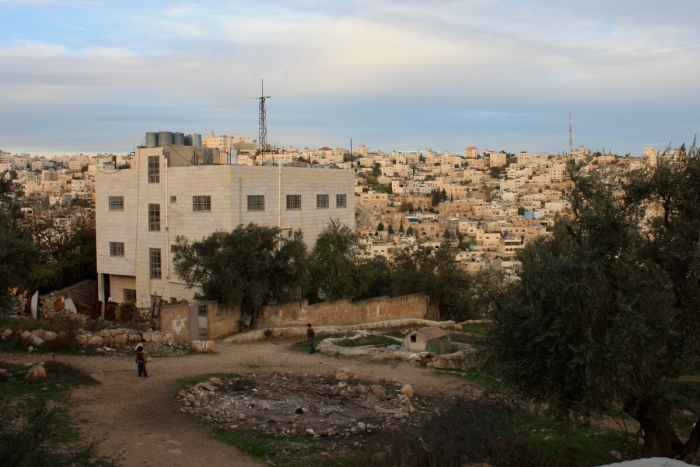 Palestinian children play near their home on a route frequented by settlers descending toward Shuhada Street. A bit further down the hill, out of view, is an Israeli soldier stationed at a lookout to ensure the safe passage of settlers.

An abandoned car. I haven’t been able to verify this, but my guess is the painted signs on the post demarcate the safe route for settlers. 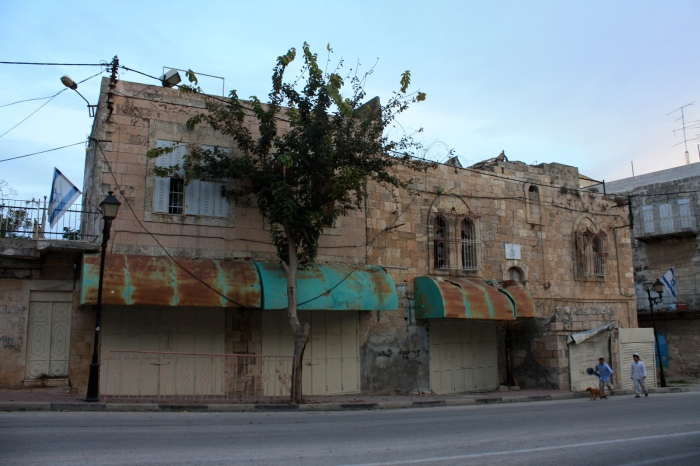 Walking down Shuhada street. Since Palestinians who do not have residency here are not allowed to walk down this street, our Palestinian friend had to leave us and loop around to meet us on the other side. We passed store after store that was empty and boarded up. The street is eerily quiet besides the occasional passersby, though we felt utterly exposed and watched. 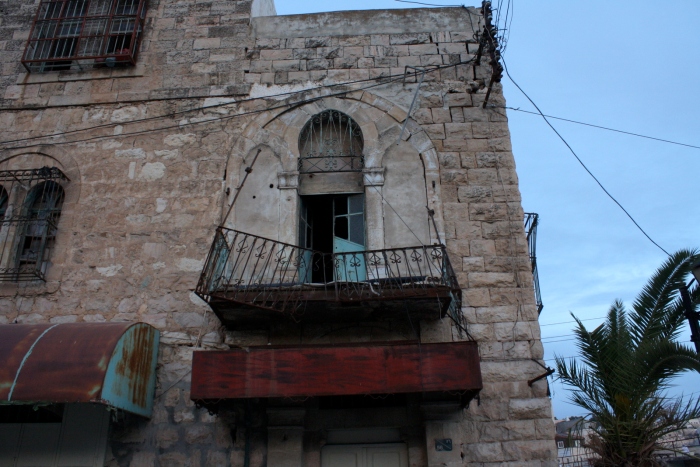 The window and balcony of this old Palestinian building have been crushed and abandoned. Though most families formerly living on this street have fled due to intimidation from settlers and the closing down of the street, some Palestinian families continue to live in these buildings. 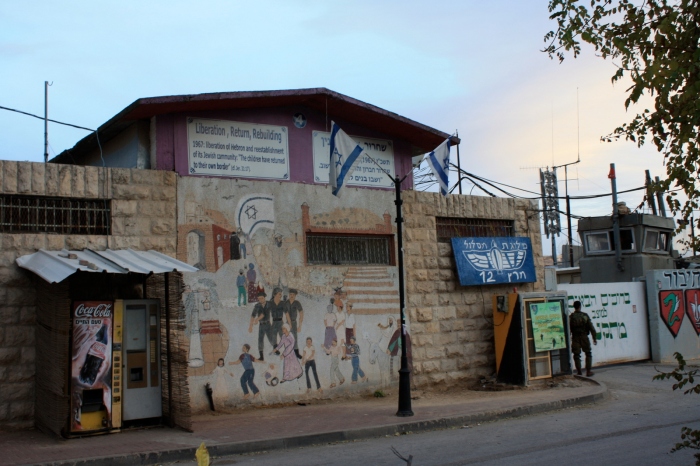 A military surveillance point stands next to a series of murals and signs laying out the settler narrative of Hebron’s history. This panel marks the year that Israel began occupying the West Bank and Gaza, 1967, and reads: “liberation of Hebron and reestablishment of the Jewish community: ‘The children have returned to their own border.’ (Jer. 31:17)” Hebron did indeed have its own Jewish community, long before the creation of the state of Israel, but this version of history ignores the many diverse groups that have called Hebron home over the last thousands of years. The 1967 “liberation” of Hebron spoken of here in reality represents the colonization and oppression of the vast majority of the current population. 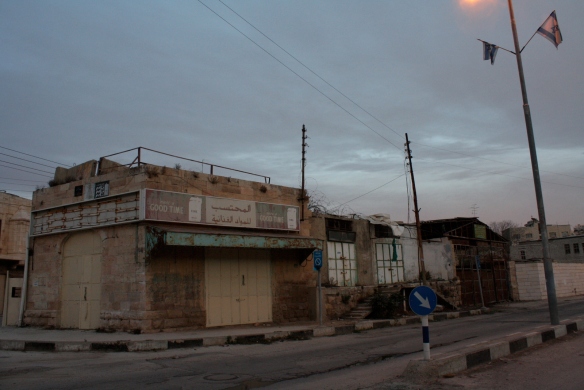 Looking back at Shuhada Street before going through the checkpoint on the other side. The only people we talked to were two Americans—the first, a settler originally from Tennessee who was drinking a Maccabe beer outside of what seemed to be the only bar-like establishment on the street. He affronted me as we passed by:

“What did you take a picture of? Can I see it?”

“I was just taking a picture of the street,” I told him, which was true.

“Oh, I thought you were taking a picture of me.” (If only.) He said this with a laugh, but somehow did not sound pleased.

Then, when leaving the checkpoint, a soldier called out to us in a jovial American accent, “Hey! Where are you guys from?” This 19-20 year old kid was originally from Ohio but had moved to Israel to join the army. Reluctantly entering into conversation, we asked what it was like being stationed at the checkpoint. He said, “it’s not so bad. At least it’s rarely boring.” 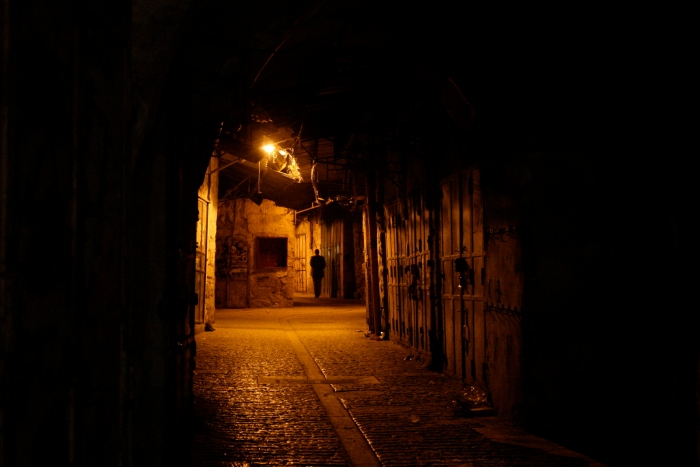 Now onto the Palestinian side, the remaining market of the old city. It also looks abandoned, but this is only because the shops have closed for the night. Settlers have moved into buildings above the market, even though it is the designated Palestinian side. It is therefore common to look up and see a military lookout or “security” camera pointing in your face. 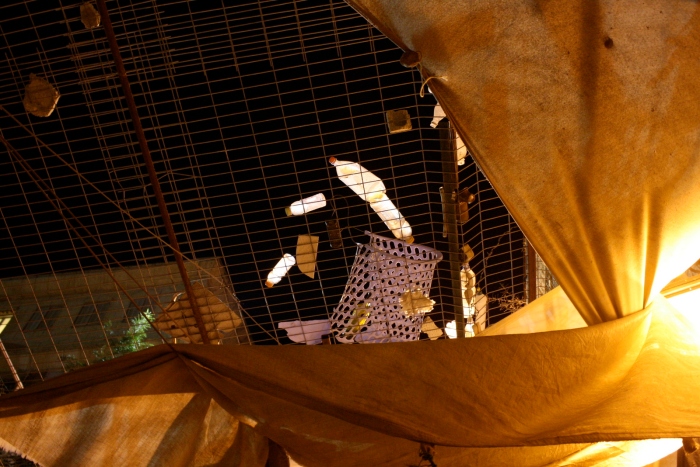 Along this old city market street, netting and other barriers have been placed above the street in order to trap garbage that is commonly thrown by settlers down onto their Palestinian neighbors.

It offends one’s sensibilities to see such obvious segregation and racism. And Hebron is a particular example because this is a space where colonizer and colonized continually confront each other, be it the Palestinian children standing aside to let Israeli settlers pass by, or the more despicable “settler march” that takes place every Saturday afternoon, in which settlers from the community march through the narrow Palestinian market street, M-16s slung around their shoulders in a grand display of power and dominance over the Palestinian population. Of course, heavily-armed soldiers walk with them to protect their every move, but this irony seems lost on the marchers.

Settlers here are understandably seen as far more extreme than other settlers—surely, you have to have significant cajones to live among a population that purportedly hates you, where you are entirely outnumbered and must have soldiers present to “protect” you wherever you go. And it can’t seem desirable to most to live in this now-lifeless ghost town, rendered empty because the state protecting you has made it so. Certainly this is not why most settlers move to settlements (indeed, many are looking for the exact opposite: open green spaces, cheaper rent, and more protections from the government).

But the city of Hebron and Shuhada Street only reproduce on a micro-level the logic of the Israeli occupation of the West Bank as a whole. In his book Hollow Land, Eyal Weizman argues that there is a certain visual logic to the occupation—that there is a reason settlements are built on hilltops often overlooking Palestinian communities, and that there barely exists a Palestinian area in the West Bank from which a settlement is not visible. Cameras look down from the settlement walls in the same way that security cameras and military lookouts are placed periodically along the old market on the Palestinian side of Hebron. An intricate system of checkpoints and closures dictates where and when Palestinians can and cannot go (or build, or plant). While near a typical settlement it may be a Jews-only highway built on Palestinian land, in Hebron it is Shuhada street, which was once the urban and commercial center of the city. 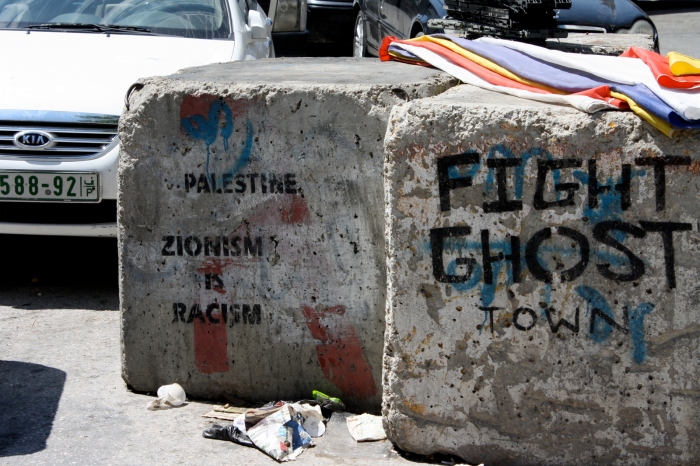 Even if it is on a more compact scale, it is the same apparatus at work. It is the same system that divides Palestinians not necessarily from Israelis but from other Palestinians, and that pushes them further into cramped urban enclaves from the inside out—with settlements co-opting more and more West Bank land, and settlements in Hebron and Jerusalem expanding from inside city centers. The same system that demands permits from Palestinians to traverse their own land, the same one that stifles the Palestinian economy and any chance at a sustainable livelihood.

Hebron is not an exception to the rule. Hebron is a mere magnification of Israeli policies that take place on a grander, more diffuse scale throughout historic Palestine.